All articles tagged with "Cruel"

Lady Betty could not sleep because her slave was snoring loudly. She tried to ignore it but she could not. So she stormed his room and she woke him up. She trampled him and crushed him as he lay there startled by what was going on. She crushed him and made him lick the soles of her feet and even attempted to slap him with her sneakers before she told him to avoid snoring.

Mistress Cynthia could not stand what her slave had done and she had to punish him. She therefore took him outside and made him lick her shoes while he was in the pool. She made him also lick her feet and humiliated him to send a message that she did not want him to repeat what he had done that had pissed off. The slave understood what she meant and promised not to do it again.

This mistress knew the mistake her slave had committed. He had tried to keep it simple but erred in the end. She decided to make him lick her ass and he did not have a choice but to do what he was elected to do. She loved how he pleased and licked her ass till she was about to climax from what he was doing to her ass and pussy. 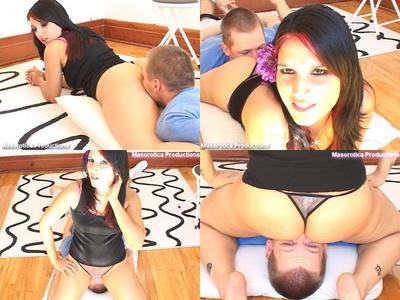 Madame Marissa trampled her slave using her high heels because she wanted him to feel as much pain as she could manage to inflict on him. He had spoiled her expensive watch while trying to play with it. She did not know how to get another one since it was a gift and a very special one at that. She crushed his chest using her heels and even jumped on his chest to make it worse.

Lady Briana did not want to talk to her boyfriend. She was pissed at him and was ignoring him. When he came to make her talk to him, she turned on him and made him lie down and she used her bare feet to cover his mouth and even his nose, nearly choking him. She then ordered him out of her room and told him she would talk to him when she wanted.

Mistress beats up her boss before quitting

This mistress wanted a raise at work but her boss kept refusing. She then set her eyes on a promotion but even that too, he did not allow her to get. She got pissed off and decided to look for another job, but not before she had given him a piece of her mind. She made him lick the soles of her shoes and humiliated him a great deal. And to make it worse, she did so in his own house.