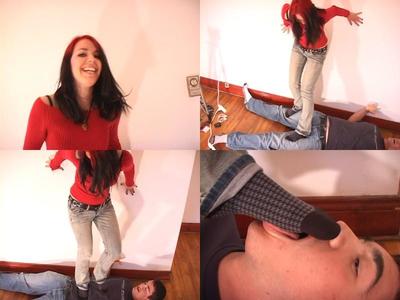 Mistress Kitty loves being by the sea side. She loves then view and the tranquility that comes with it. She does not like crowded places and that is why she prefers going when it is quiet. This guy came out of nowhere and disturbed her peace and quiet and she could not have it. She had to do something about it so she trampled him with her high heels as punishment and made him lick her dirty soles.

Mistresses hunt down and punish guy for messing with them

Mistresses Teodora, Sonny and Maya had a score to settle with this guy. They hunted him down and when they found him, they did not spare him. They humiliated him a great deal and they did it in turns so that they would make it continuous and none of them would be tired from doing it. They made him lick their asses, smell their farts, endure them facesitting on him and many other painful and humiliating things.

Lady Briana did not want to talk to her boyfriend. She was pissed at him and was ignoring him. When he came to make her talk to him, she turned on him and made him lie down and she used her bare feet to cover his mouth and even his nose, nearly choking him. She then ordered him out of her room and told him she would talk to him when she wanted.

Mistress beats up her boss before quitting

This mistress wanted a raise at work but her boss kept refusing. She then set her eyes on a promotion but even that too, he did not allow her to get. She got pissed off and decided to look for another job, but not before she had given him a piece of her mind. She made him lick the soles of her shoes and humiliated him a great deal. And to make it worse, she did so in his own house.

Madame Madison and her friend wanted to enforce discipline in their neighborhood. They found out that this guy was not pulling his weight and was the cause of most of the complaints and problems they had. So they called him to their apartment and he thought they were going to tell him the same old things. But they instead forced him to lick and drink their spit. They humiliated him badly till he agreed to change his ways.